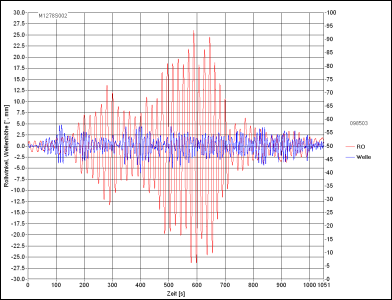 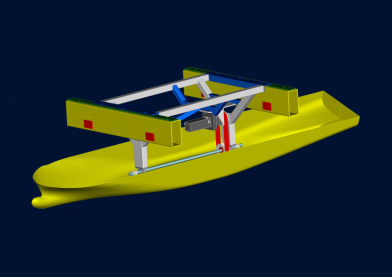 In recent years particularly, investigations of the roll behaviour, especially the roll damping of ships, has developed into a special field of hydrodynamic research. Due to high deck loading, modern container ships have low stability reserves and, in high seas, are exposed to the risk of extreme rolling motions. The development of specialised vessels and supply ships for the offshore sector is characterised by strict specifications in terms of positioning and motion stabilisation to reduce the risks of coming along side under rough conditions.

The SVA Potsdam has advanced testing methods along with the latest associated measurement methods. The SVA has offered innovative methods for improving and optimising the rolling behaviour of ships, mainly for stabiliser fins, rudders, Voith-Schneider equipment and roll damping tanks.

The SVA has a system that causes forced rolling motions of ship models with variation of rolling amplitude and frequency, with and without forward motion. By doing this, the rolling moment can be measured.

Parameterically excited rolling can be simulated with the ROLF method (nonlinear strip method), which has been integrated into the UTHLANDE program system. For a quick estimate of the risk of a ship with respect to parameterically excited oscillations, an SVA developed method is used which provides, based on fluctuations in metacentric heights, an indicator as to whether a rollover impulse is to be expected for a combination of ship speed, wave height and wavelength.

For the selection of roll damping tanks, calculation methods are available that allow both Frahm and box tanks to be analysed.

For large yachts and cruise ships in particular, stabiliser fin systems are available with corresponding geometries which damp rolling even while the vessel is stationary. The roll damping rates of these and similar systems are determined in the towing tank by applying different wave conditions to the model.