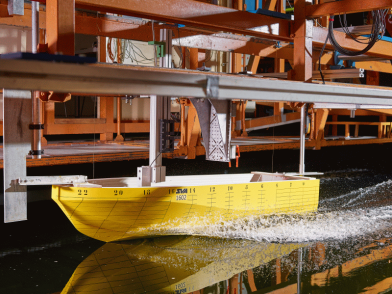 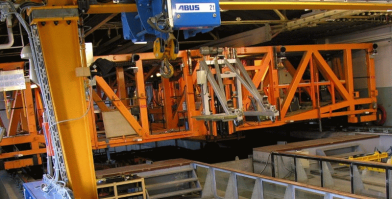 The SVA Potsdam operates a towing tank which is 280 m long and has a rectangular cross-section of 9 m width and 4.5 m depth. The maximum towing speed is 7.5 m/s with an accuracy of 0.6 mm/s. The towing carriage is driven via two double stator linear motors.

At the front of the tank there is a wave generator which can produce regular and irregular waves and also wave packets up to a wave height of 0.30 m. At the back, the towing tank ends in a beach as a wave absorber.

In the towing tank, free running tests are carried out with propellers and propulsion systems as well as resistance and propulsion tests, wake field measurements and paint flow tests. Additional elements of the testing spectrum include maneuvering, seakeeping tests and experiments with submersibles.

The towing carriage is provided with a flexible carrier system that can accommodate all equipment and experiments. The support at the rear of the towing vehicle is hydraulically adjustable in height. For example, the open water dynamometer and the submarine planar motion system (SUBPMM) or the PIV system can be installed there.

The equipment of the towing carriage is completed with cameras for the QualiSys optical tracking system and video cameras as well as cameras for recording experiments and images of wave systems.

For propeller open water tests in the towing tank the following dynamometer types are mainly used: H29 and H39 from Kempf & Remmers. Both dynamometers measure the thrust and torque of the propeller. On both devices, a measuring balance for the thrust nozzle can also be mounted. The H39 can be equipped with a shaft which permits the measurement of the lateral forces of the propeller.

The dynamometers are capable for experiments with shaft inclination.

The open water carriages FK1 and FK4 offer the possibility to perform tests with internal propulsion dynamometers for ship models. Custom dynamometers from Kempf and Remmers are used for the measurement range and for the FK4 carriage, the counter rotating dynamometer R40 from Kempf & Remmers is used. A measurement balance for nozzles can also be mounted on both devices. 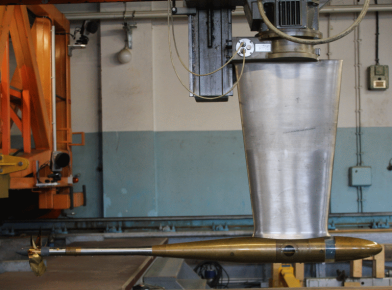 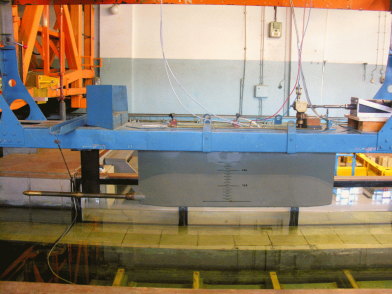 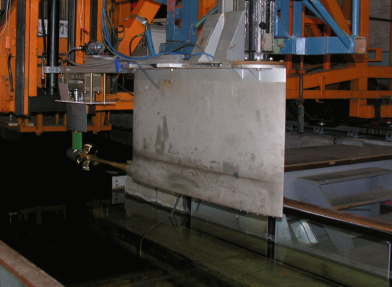 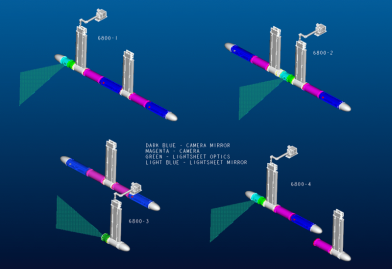 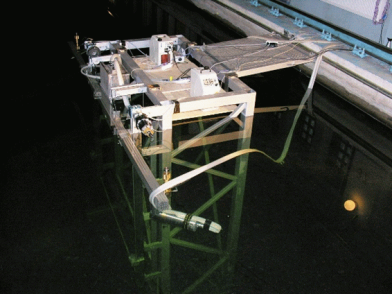 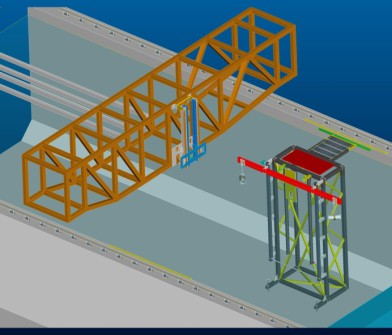 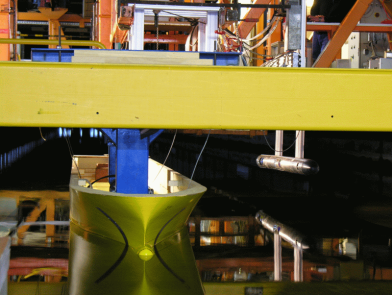 With the 3D PIV system (TSI brand) the velocity fields in water can be measured. The possible field of view measures up to 800×1000 mm2 with a frequency of up to 14.5 Hz. At this maximum frequency up to 1200 frames can be recorded in one run. Beside the classical wake field data of velocity components along certain radii even the vorticity and turbulence intensity can be retrieved directly from the PIV results. Please refer to the table for more technical details. Read more about our 3D PIV system and its versatile applicability here. 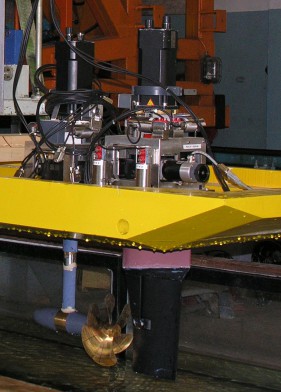 For the measurement of forces and moments on bodies within flows, 3 component and 6-component balances are available with different measurement ranges and areas of operation. The balances R37SR1 … 6 are suitable for open water tests and for use in models. The devices are designed for measurement of rudder and fin forces and to capture integral forces on thrusters. The majority of balances are equipped with a rotary table, which can be set with the angle statically and dynamically. For use with thrusters the balances are equipped with a drive motor. The total torque is detected by a torque sensor.

The balance R200 is designed for open water tests with large motors and for general force measurements. It is additionally equipped with a turntable, drive motor and torque sensor.

The balances R100, R 250 and R 350 can be used for force measurements on ships and floating or submerged structures. These allow the change in yaw, trim and angle of heel, and the application of different connections. 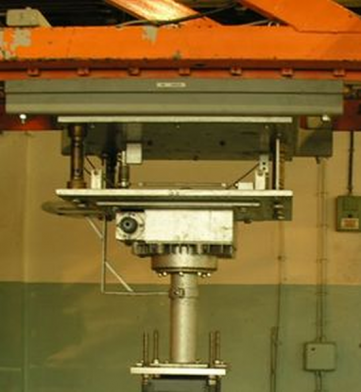 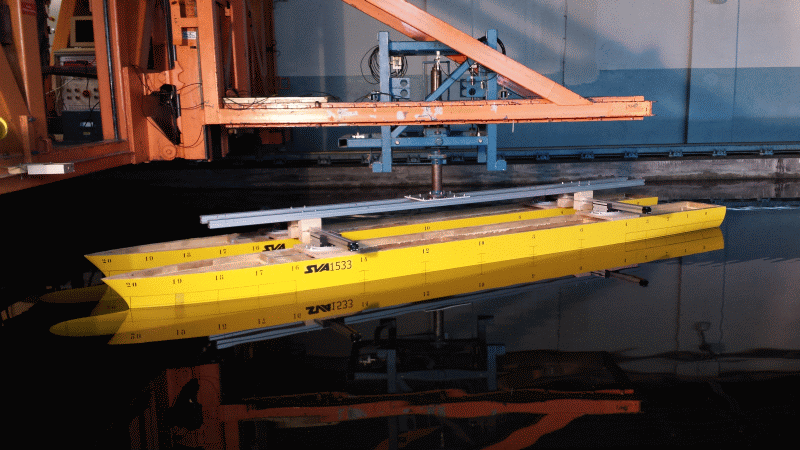 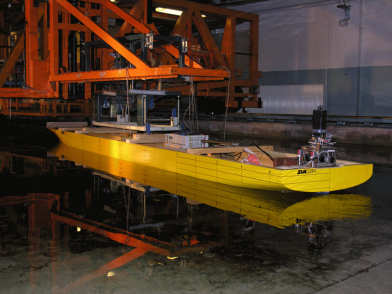 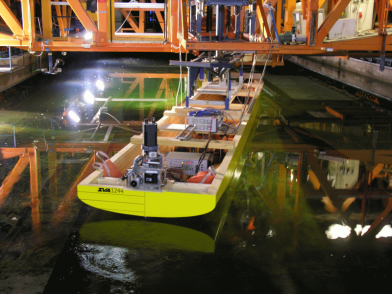 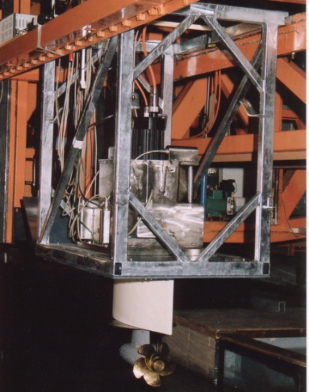 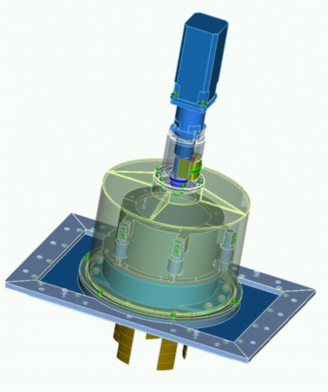 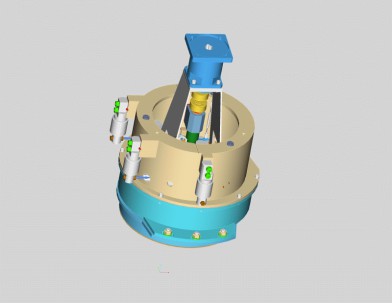 For measuring the forces on VSP (Voith Schneider Propeller) drives, special measuring balances have been developed which, in comparison with the conventional VSP balances, enable the measurement of thrust, two lateral forces, and the drive torque. The VSP balances can be used in ship models, in the towing tank, and in the cavitation tunnel.

With an adjustable blade hub, the dynamic adjustment of ptich during testing is possible, for example, for stopping manoeuvres. The adjustable blade hub achieves the change of blade pitch with a multiphase motor with two limit switches built in which switch off the engine at ± 30° adjustment. The average pitch is marked on the inner hub. The angle is measured with a potentiometer. The hub is mounted on a carbon ring. The control data and the values of the potentiometers are transmitted via a slip ring assembly. 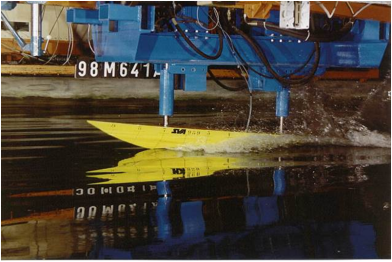 In heavy seas, especially in conjunction with high ship speeds, due to the heave and pitch motions of the ship, the bow can come out of the water. When re-immersing and exceeding a critical relative vertical velocity at the hull surface, enormous pressures and forces can occur which can cause damage to the ship due to these impacts.

To investigate this problem experimentally, a hydraulic slamming system was developed in the SVA. With this system, pitching, heaving and coupled movements can be introduced with a frequency of up to 2.0 Hz and an amplitude of up to 10 cm on model ships. It can test models with a length of 5.5 m and a moving mass of 500 kg. By measuring pressure variations in the kHz range on up to 30 measurement points, local peak pressures can be identified. 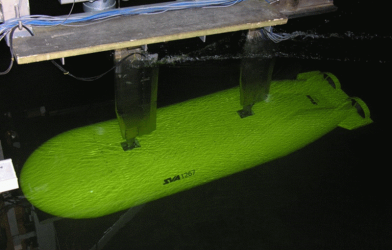 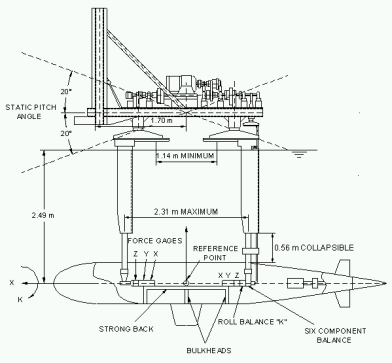 Measurements with submerged bodies are performed on originals or copies in original size and scale models. The range of test objects extends from submersibles such as ROVs and AUVs to submarines and special investigations of marine life and divers.

To determine the motion behaviour of underwater vehicles in the vertical and horizontal plane, and also for resistance and propulsion tests as well as wake measurements, the SUBPMM (Submarine-Planar-Motion- Mechanism) system is used. What is special about this system is that the measuring points of the forces are placed within the model and hence the influences of the towing device can be eliminated. The system is adaptable for model sizes from 1 to 6m and depths of 0.5 to 2.5m. For driving the models, enclosed motor dynamometer modules are used with different sizes to choose from.

For the determination of the motion behaviour of underwater vehicles, the simple drag motion of the model can be superimposed with an additional level of movement with the SUBPMM system. In addition, the angle of attack of the model as well as the control arms can be varied. Thus, it is possible to determine the coefficients for the equations of motion.

The SUBPMM system is also used for resistance and propulsion tests. For wake measurements a probe with pressure sensors is used which can be adjusted automatically.

In the R&D projects, “Scale Effects in Determining the Manoeuvring Behaviour of Underwater Vessels by Model Testing” [3], “Correlation of Resistance of Submerged Bodies” [1], “Interference Phenomena in Substructures of Submerged Bodies” [2] and “Influence of the Reynolds Number carried out in the Thrust Deduction Fraction”[4] Geosim-tests and calculations for underwater vessels for motion behaviour, resistance and interference phenomena were executed. The results of these studies are incorporated into the correlation for full scale predictions. 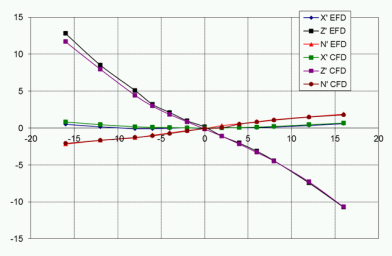