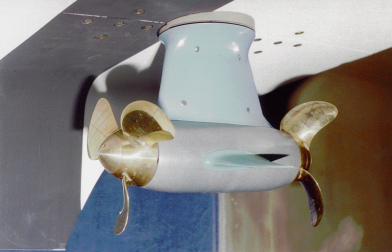 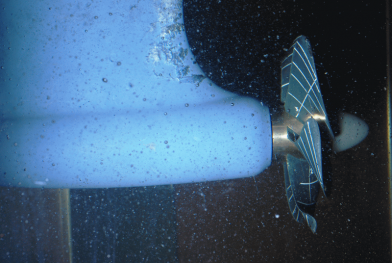 The main feature of podded drives is the integration of a powerful electric drive in a hydrodynamically optimised pod beneath the ship which drives the propeller directly. The full power can be used in any azimuth direction (0 – 360).
The podded drive is a propulsion system comprised of the components propellers and pod housing. The development and optimisation of podded drives requires knowledge of the interaction between propeller and pod housing and about the influence of design parameters on the characteristics of the system.
SVA Potsdam has been working in the field of podded drives since 1995 [1], [2]. Among other studies, the applicability of podded drives, dynamic flow calculations, analyses of various podded drives as well as numerous model studies have been performed there [3], [4], [8]. Developments for podded drives were conducted in collaboration with various manufacturers [3], [9].
As part of a BMWi funded project “Integrated Ship Design for Ships with Podded Propulsion Systems”, aspects of ship design for ships with podded drives were examined. In the BMWi funded project “High-Speed Pod”, concepts for podded drives with application speeds up to 30 knots were developed and studied experimentally and computationally [5], [6]. The ideas and findings resulting from these projects were the basis for the development of High Efficiency Pods with HTS technology [9].
The manoeuvrability of propulsion systems with podded drives were examined as part of a BMBF funded project [7]. The arrangement of the pod at the stern of the ship, the use of fins, and the influence of the propeller assembly were analysed experimentally and computationally.
Standard podded drives with pull and push propeller variants have been developed and investigated experimentally [6], [8], [9]. The pod housings (gondolas) were particularly varied with regard to the gondola diameter and the transition from the propeller to the gondola in order to determine the influence of geometric parameters on the characteristics of podded drives (open water, propulsion, cavitation).
The development and the study of podded drives places high demands on measurement technology and experimental methods. For open water, propulsion and cavitation measurements, manoeuvring and speed measurement systems on podded drives have been developed, tested and used successfully. To validate the evaluation and forecasting methods for measurements with podded drives, CFD calculations were performed.
With the available azimuth measuring systems for podded drives, pull, push, twin, and counter-rotating propeller assemblies can be analysed. Among other things, the thrusts and moments of the propeller are measured in the shaft and the lateral and vertical forces can be measured at the housing. 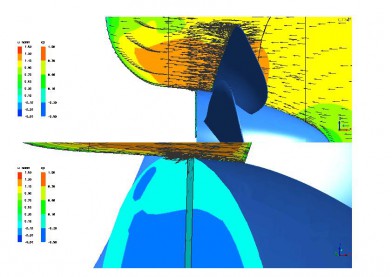 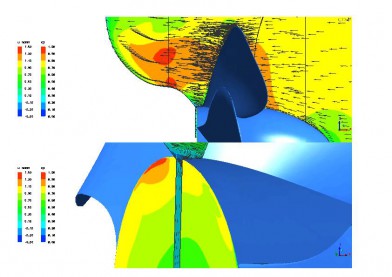