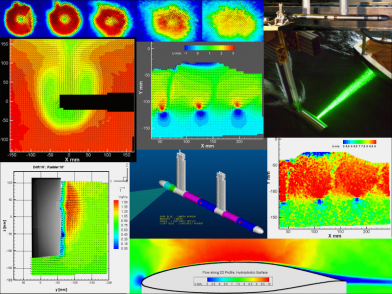 PIV is a method for measuring velocity fields in fluids. The process is purely visual and is therefore a non intrusive measurement method; the flow to be examined is not affected. The measurement of the velocity field is based on the determination of the displacement of particles (bubbles, seeding particles) in the flow by distance Δs within a period Δt. The shift Δs is detected by two photographic images of the particle images which are received in a very short time interval Δt. To this end the particles in the fluid are illuminated by very short laser flashes. From the displacement of the particle images in the period Δt the velocity vectors of the fluid at the position of the particles can be calculated using stochastic methods. By using two cameras with stereoscopic recording, a three-dimensional flow field can be determined, i.e., all three velocity components are then available in the measuring range.

The process is very versatile. So far the following measuring tasks, among others, have been undertaken:

With PIV the whole velocity field is measured in every frame. From the individual recordings the transient evolution of the flow can be visualized and also a mean velocity field can be determined by averaging all recordings. The desired spatial resolution determines the size of the field of view and the achievable number of vectors in the measuring range. The largest achieved measuring range so far had an extension of approximately 400×600 mm, in this case about 6000 vectors. For this task, a stereoscopic PIV system from the company TSI is used. It has a modular design, so that all symmetrical, asymmetrical and independent arrangements of cameras and light sheet can be realized. Thus, for example, it is possible to measure the full depth of the towing tank.

Please read more about the technical specifications of this PIV system here. 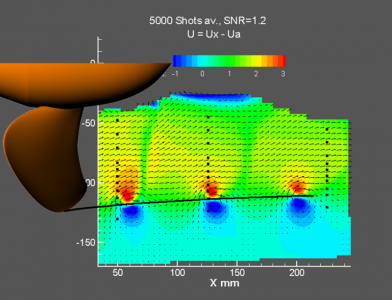 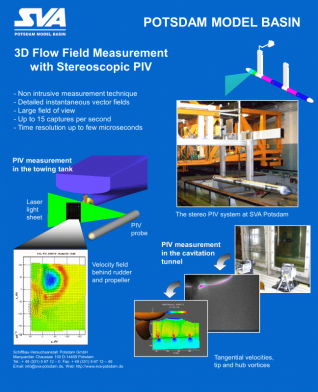