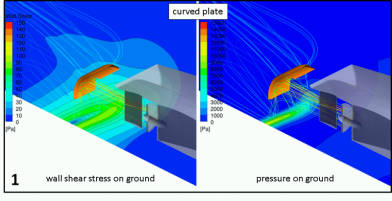 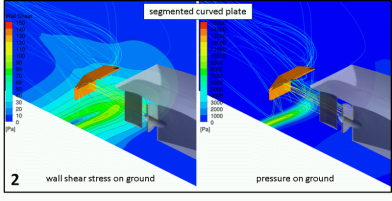 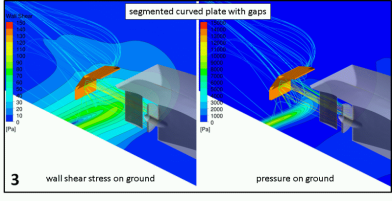 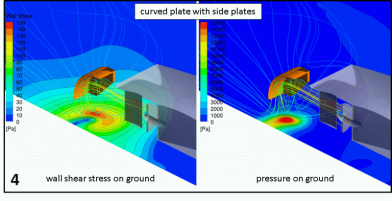 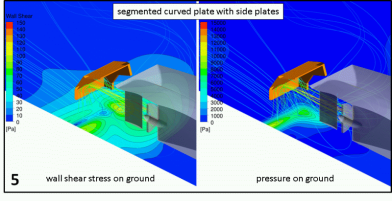 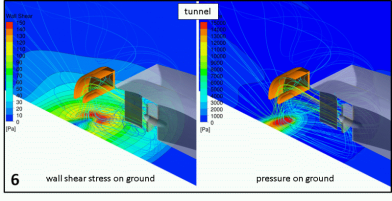 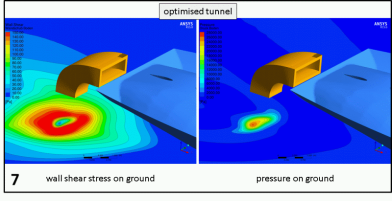 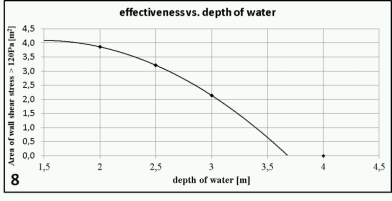 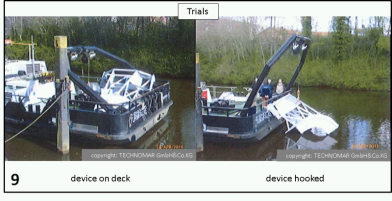 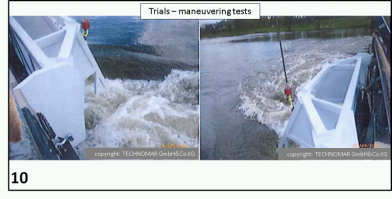 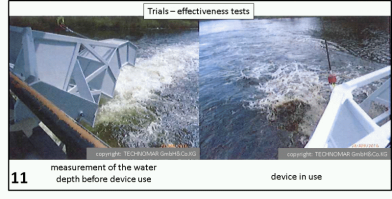 The Schiffbau-Versuchsanstalt Potsdam Potsdam GmbH (SVA) (Potsdam Model Basin) was commissioned by the Special Unit for Mechanical Engineering (FMM) of the Waterways and Shipping Office Minden, to design and calculate a wash deflection behind a ship. The inland icebreaker “Turmfalke” is to be used during the ice-free period, among other things, to stir up and flush the silt deposited on the bottom of the waterways. The propeller wash of the vessel is to be redirected by a device so that the best possible disturbance and resuspension of deposited silt is reached at the water’s bottom. A similar system has already been provided to the client by another company and its successful operation has been repeatedly demonstrated.

The task was divided into 4 work packets: In a preliminary study, a variety of possible baffles were to be fundamentally compared. Then a selected variant would be optimised with regard to its effect on the water bottom. This was followed by the study of the effectiveness at different depths, and the study of various steering flaps to assist manoeuvrability.

With the help of a sea trial protocol of a sister ship, a propeller of the Wageningen B-series was selected which nearly achieves the characteristics of the sea trial. The radial thrust and torque distribution of this propeller was determined by SVA’s own program VORTEX and modelled through an actuator disc within CFD calculations

The geometry of the deflection device is subject to a few restrictions. The depth of the device should not exceed the ship. Along with that, the feasibility of using simple steel construction methods was looked into.

The draught of the ship in the calculations was D = 1.4 m. The water depth was set in the preliminary study and during the optimisation at h = 2.5 m. To determine the effectiveness at other water depths, the effect of wash deflection at h = 2 m, h = 3 m and h = 4 m were calculated. The geometry of the icebreaker was provided by the client. At the location of the propeller a cylindrical region was defined, in which the volume force of the actuator disc was induced. Down below, the calculation area was limited by the water bottom and from above by the surface of the water which was defined as fixed. For the preliminary study a symmetrical situation was adopted (calculation of the half ship / half the region, no twist in the propeller wash) to shorten the calculation time. To optimise the selected variant out of this, the entire flow field was calculated around the ship.

Analysis of the Numerical Simulations

The effect of wash deflection on the water bottom was calculated. The sand roughness of silt soil was assumed k = 0.06 mm (citation in consultation with the client). Through adoption of a fixed bottom, no change in the ground topology by the wash effect could be registered. Above a certain shear stress, a Bingham fluid like slush begins to flow. Therefore, the essential design criterion was the size of the area of the waterway bed where a wall shear stress of τ = 120 Pa is exceeded. As a further assessment criterion, the pressure on the bottom was evaluated.

The calculations showed that a side plate is required for effective wash deflection. Through this, the spreading of the wash to the side is significantly reduced. Without a side plate, the required wall shear stress of τ = 120 Pa is not reached. Flow permeable gaps in the deflector should be avoided, as these can substantially reduce the effect of the deflection. The images to the left show the resulting values in dependence of the selected geometry variant (figures 1-6). The closed tunnel variant (figure 6) was the most effective and was selected by the client for optimisation.

Optimization of the Tunnel Variant

For the geometric optimisation of the tunnel, a parametric model was developed for the CAE program “CAESES”. The width of the entry area was set to 1.30 m. In this way, function is guaranteed even with slight rudder deflections. Through the dependency of the geometry on defined parameters, it could be changed fully automatically for optimisation. The vertical position of the upper edge of the tunnel entrance, the height of the entrance area, the length of the tunnel, the ratio of entry area to exit area and the ratio of length-to-width of the exit area were optimised using parametric variation in regard to the resulting bottom surface with a wall shear stress of τ > 120 Pa.

Results of the Optimization

The top of the tunnel is located just below the surface of the water. To prevent the deflected wash from flowing over, the area between the ship and deflection device should be covered at the surface of the water. The breadth of the water bottom area experiencing a wall shear stress of τ > 120 Pa is about 2.5 m, the length is about 2 m. The wall shear stress and the pressure at the water bottom which are generated by the optimum tunnel variant is shown in figure 7. To demonstrate the effectiveness of the optimised tunnel geometry at different water depths, additional calculations at h = 2, 3 and 4 m were performed. The results show a moderate decrease in the effectiveness depending on the water depth. At 4 m water depth 120 Pa wall shear stress is no longer achieved (see graph in figure 8).

Evaluation of the Results

Because of the applied simplifications (fixed water surface, quasi-static calculations, actuator disc, no change in the ground topology) the results may only be qualitative. The pressure on the water bottom corresponds to 28.000 Pa (N/m^2) at a depth of h = 2.5 m. Such pressure should lead to a deformation of mud at the water bottom (washed out cavity) which will again significantly increase the flushing effect.

The optimisation of the device was carried out at a low system speed, because the self propulsion point was achieved in the calculations with PMotor = 2/3 PMotor max below 5 km/h. However, the device appears to produce a significantly lower resistance in reality. This suggests that the specification of a “fixed” water surface – despite a plate between tunnel entrance and ship – is not optimal under these circumstances. In operation, the device would clearly be washed over. To reduce the speed, the propeller wash is to be restricted in the future through additional lateral plates.

Real-World Implementation of the Wash Deflector

All following contents shown were edited by the company “TECHNOMAR GmbH & Co. KG” and provided to SVA through the Special Unit for Mechanical Engineering (FMM) of the Waterways and Shipping Office Minden from the sea trial protocol.

The ship carries out rudder manoeuvres reliably. Also, no problems arise when reversing. The device reduces the boat speed under full load from 15 km/h to 12 km/h. The skipper states: “A safe manoeuvring is possible. There are no restrictions.”

The provided test course has been driven through and the water depths read. The water depth is 2.4 m on average. Then, a distance of 400 to 500 m is covered in a total of 3 runs with steps of different speeds. Through the flushing process the whirling water came to the surface and was deep black with sediments. After the 3rd passage gas bubbles (fermentation gases) were shown on the surface. The experiment was ended and the device taken out of the water. The test course was driven again and the water depth determined. It was now measured at around 2.80 m. The waterway course was deepened in this experiment by about 40 cm. The thrust vectoring device must now be tested in further experiments on the effectiveness of the flushing. This is carried out and documented by the WSA-Meppen. All participants believe that the device is an improvement in controlling the silt problem on the Ems River.